Where we are - S.Giovanni in Valle

A suburb between history and legend

We are in one of the old town area called Veronetta, in the ancient suburb of San Giovanni in Valle, a green area of Verona, little known (located about 2 km from the Arena), which houses a rich testimony of the early Christian era, Longobard and medieval, wrapped in the thin air of ancient times where history and legend mingle.

Starting from Piazza Isolo and going via Pignolo Bridge, one arrives at Via S. Giovanni in Valle; here, after a few meters, on the left, there is a large arch that leads to a spacious grounds enclosed by ancient walls, said CORTE DEL DUCA.      The name tells us that in this area there was the palace of Alboin, King of the Longobards, who conquered the city in the autumn of 568 making it his headquarters and the establishment of the Duchy of Verona.

The Court's origins, however, are much older and date back to the years when the King of the Ostrogoths, Theodoric, had his palace in Verona. Paul the Deacon in his History of the Lombards said that, after a night of carousing in Verona, in the palace that had been Theodoric, Alboin drank wine in a cup made from the skull of Cunimund, father of Rosamund, taken prisoner and forced to be his wife according to tradition, even Rosamund was forced to drink in his father's skull! To avenge the cruelties suffered, Rosamund made a conspiracy against her husband Alboino who was murdered on June 26, 572.

There is also another legend about Rosamund: desperate, not to submit to Alboin, he tried to commit suicide leaving starve; to save it would have been the cook of the court that she invented a new energy recipe, "Pearà" the sauce of meat broth and bread crumbs, which still has a specialty that accompanies the "boiled meat."

In the following centuries this area became a cloistered convent for the Sisters of S.Chiara (the Clarisse) who lived there from 1400 to 1964, with its own church  dedicated to the patron saint (S.Chiara), a cemetery and land planted with vegetables.

In this period the proiecti rota (the wheel of the exhibits) still present in the cloister: a slit in the wall of the convent, large enough to be able to put a newborn and has a swivel mechanism that allowed to introduce the baby (called Celestine), leaving him in anonymity.

North of the Court rises, in his beautiful golden tuff, the CHURCH OF SAN GIOVANNI IN VALLE, built in the sixth century and rebuilt after the strong earthquake that struck in 1117 Verona.

It presents a sober façade, smooth, vertically divided into three sections corresponding to the inner aisles. The facade has windows on either side of a central two-light window and a fifteenth-century portal in marble, with a pensile porch above. There is an important fresco by Stefano da Verona, with a Madonna and Saints in the lunette.

On the right side of the church, as well as the beautiful cloister and the Romanesque bell tower, is the rectory, which, 900 years old, is the oldest inhabited house in the city.

The interior of the church is basilical, with three naves separated by alternating pillars and slender columns of red marble. The walls have frescoes of the late Middle Ages and a tabernacle of the fifteenth century.

In the underground crypt two valuable marble sarcophagi are kept: one early Christian of the fourth century, decorated with Biblical scenes, contains the relics of saints Simon and Jude; the other sarcofagus, the Roman, the third century, is decorated with a strgil pattern on the sides and a niche (an elaborate shell) with the effigy of the husband and wife, as well as, on the sides, those of Saints Peter and Paul.

This is a place where you can breathe a deep religiosity and where pagan rituals, Arians and Catholics have followed and stratified over the centuries. In fact, the church is located above an ancient Roman burial area where there was a temple dedicated to the sun god; Then, during the domination of the Goths and the Lombards, welcomed their cathedral dedicated to St. John the Baptist, whose feast day falls in the days of the summer solstice, that both were celebrated by the worshipers of the Sun God.

A few steps from the church opens PIAZZA CISTERNA, like a Venetian square, still adorned in the center, from the well of large underground cistern, which was collected the water coming down the valley from nearby Fontana del Ferro. The large reservoir that supplied the inhabitants of the popular quarter and the monastery was built in the first half of the fifteenth century and remained in use until the late nineteenth.

Going along Salita Fontana del Ferro, you arrive in a few steps to VILLA FRANCESCATTI, a noble and beautiful sixteenth-century mansion that belonged to the family of Della Torre, then the Algarotti, Zenobio, Odoli, From Bovo, Palazzoli and finally to Fracescatti that, in the second half of the twentieth century donated it to the Sisters of the Holy Family, with testamentary constraint to make a home for orphan and needy girls. Expanded several times over the centuries, it has been restored in 1978, after a long period of decline that has seen even the majestic garden grow wild. The restoration works have brought the villa original appearance and restored the large park, which covers an area of ​​over 5000 meters, with old trees, caves and stunning views. Its frescoed rooms now house one of the most beautiful Youth Hostels of Europe.

Continuing, the road climbs quickly up the hill, and after about 200 meters, you arrive at an intersection where there is the millennial FONTANA DEL FERRO , from which water flows that Veronese appreciate for its renowned health.

The fountain is called "Iron" from the name of the goddess Feronia, Roman goddess of fertility, protector of forests and crops, according to the mystical character of the place, where, in Roman times, were celebrated propitiatory rituals. To this day every year, coinciding with the summer solstice (June 21), it held a small block party with music band, folk songs and recitations of the old country tradition.

From here a dirt path that invites to a beautiful nature walk along the ancient WALLS SCALIGERE, the mighty defensive belt built in the fourteenth century by Cangrande Della Scala in defense of the hilly area of ​​the city. The wall is formed by curtains and towers, protected by a deep ditch dug in the hill: the material obtained from the excavation was used for the building of the wall, about 9 meters high and thick 1 and 1/2. The edges of the towers are of brick, with the characteristic Scaligera "sawtooth" to get a better connection with the walls of the walls, built of stone and tuff, alternating with horizontal brick files, in correspondence of each "tooth of saw". Strengthened by the Venetians in the sixteenth and nineteenth century by the Austrians, the mighty defensive work is even today in good condition and offers from its towers a wonderful panoramic view of the city.

Following the Walls for a little over 1 km, you get to S. ZENO IN MONTE front of the Mother House of the Opera Don Calabria, home to many religious buildings, and the house where the saint lived Giovanni Calabria.

Going down the Via SCALA SANTA, drive back along the picturesque route of an ancient Via Crucis: a long white stone staircase that the inhabitants of the village dated in prayer during the Holy Week celebrations, stopping in front of each "station" carved in the wall.

Further down, it follows the narrow Vicolo Pozzo and return to the Court of Duke, where he had started our path.

At the corner of Vicolo Pozzo and Via San Giovanni in Valle you can visit the MUSEUM AFRICAN of the Combonian Fathers, a rich collection staged to show Veronesi the cultural realities of the peoples among whom they live missionaries.

Our structure "Residence AD OLIMPIAM" is located almost at the end of Via Fontana del Ferro, in a quiet street closed suddenly. From here, up the hill and continue left past the Fontana del Ferro, are just a short (3oo meters) of TEODORICO THE CASTLE (ruins) and CASTLE S.PIETRO, place in the summit of a hill that rises a few hundred meters behind the Roman Theatre. The square in front you can enjoy a spectacular view over the city.

The St. Peter Castle is a military barracks Habsburg, built in 1850 on the ruins of a former medieval fortress.

Although it has the typical architecture Austrian imperial rectilinear geometries, the fort was built to blend in with their surroundings, using local materials Veronese architecture: stonework and brick facings for the vertical structures, brick for the times, stone and tuff for ornamental elements.

The discovery of some graves Longobarde right into a in the into a wall of the access stairway to St. Peter's Castle, made many archaeologists believe they have found the tomb of Alboin, who was buried here, from his followers, according to tradition, after being murdered in a plot hatched by his wife Rosmund. 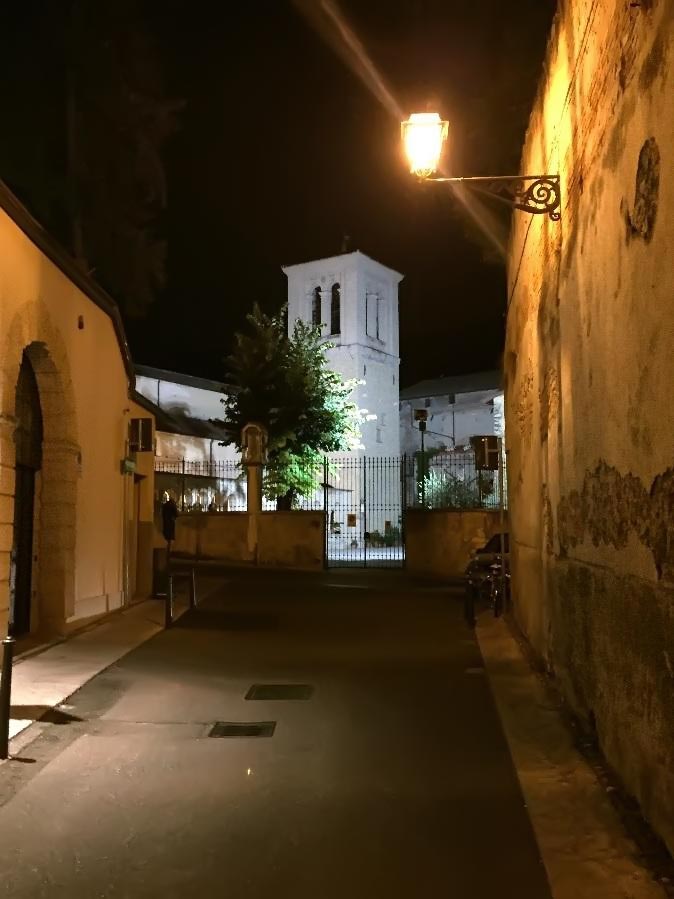 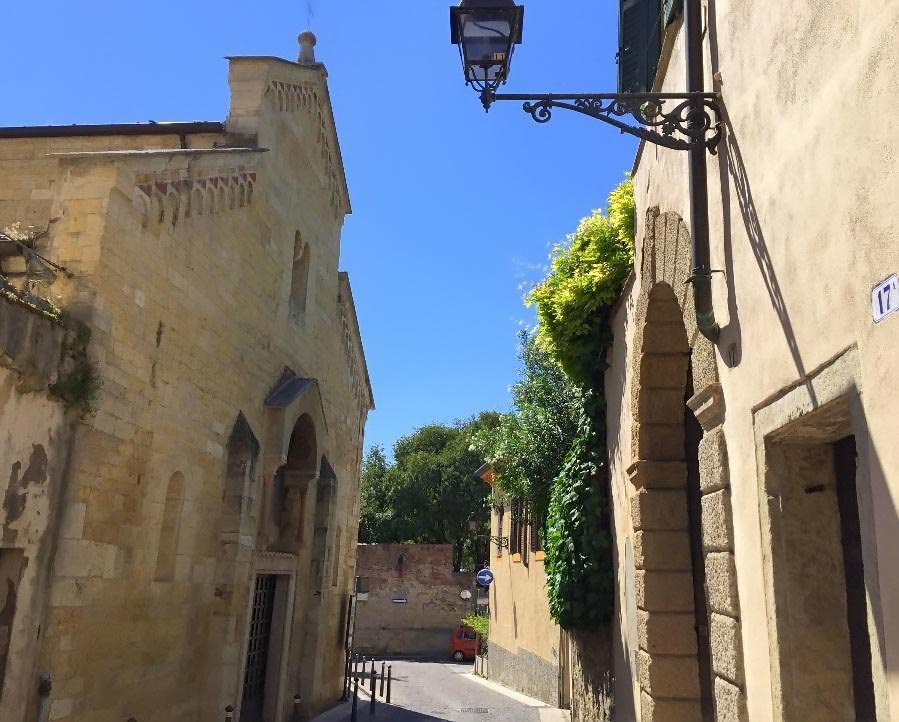 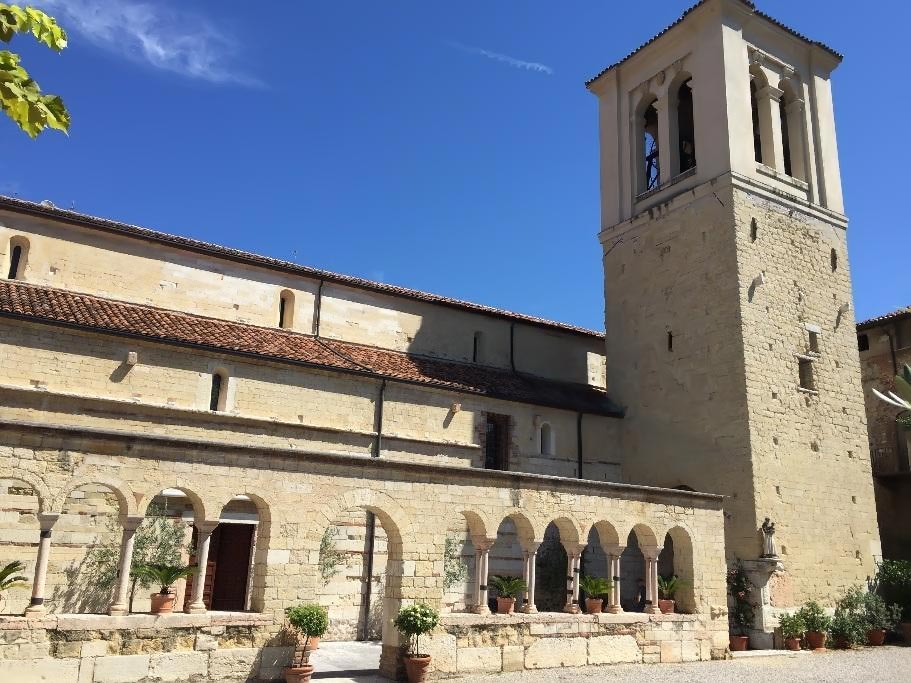 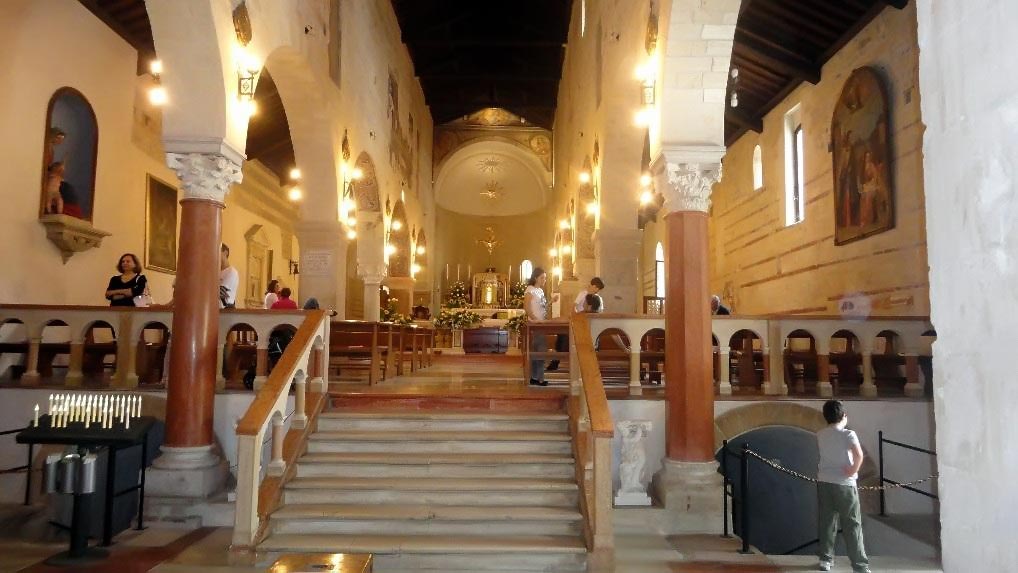 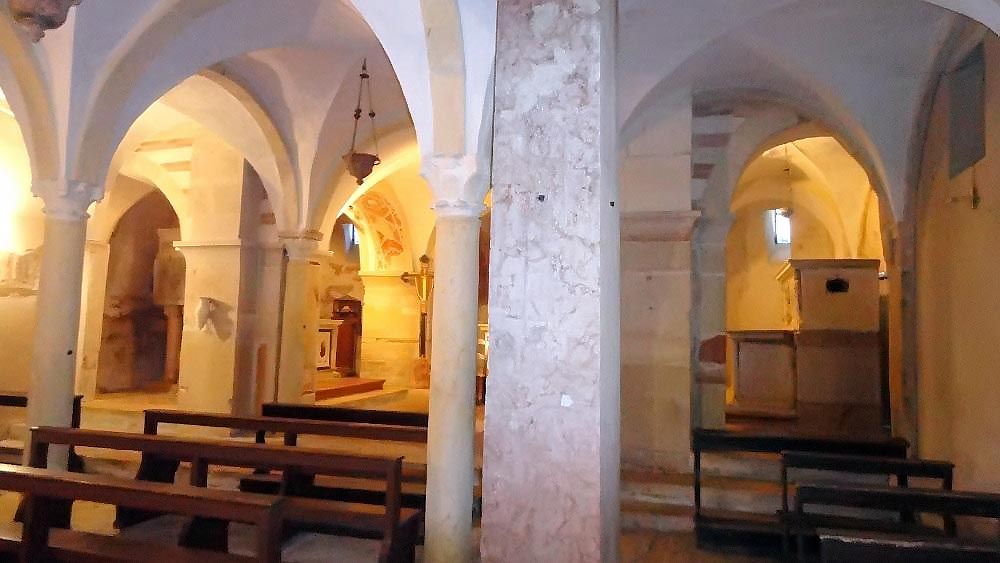 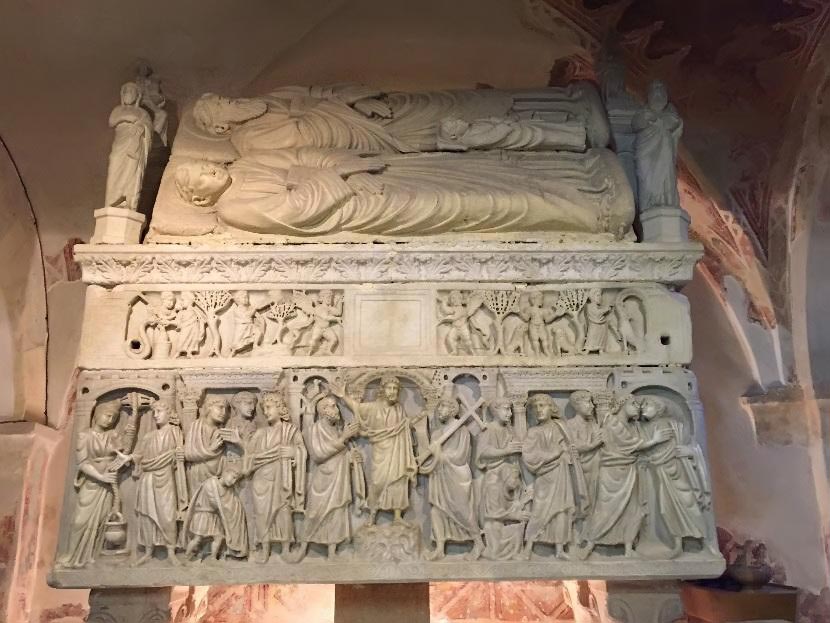 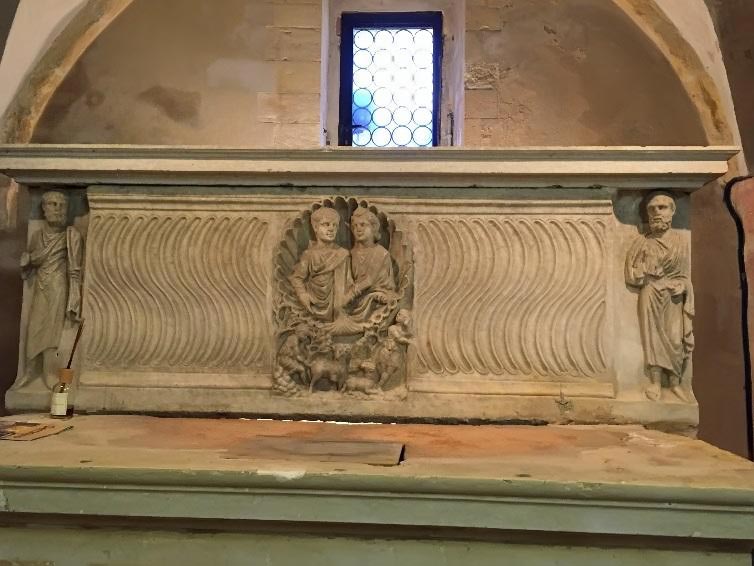 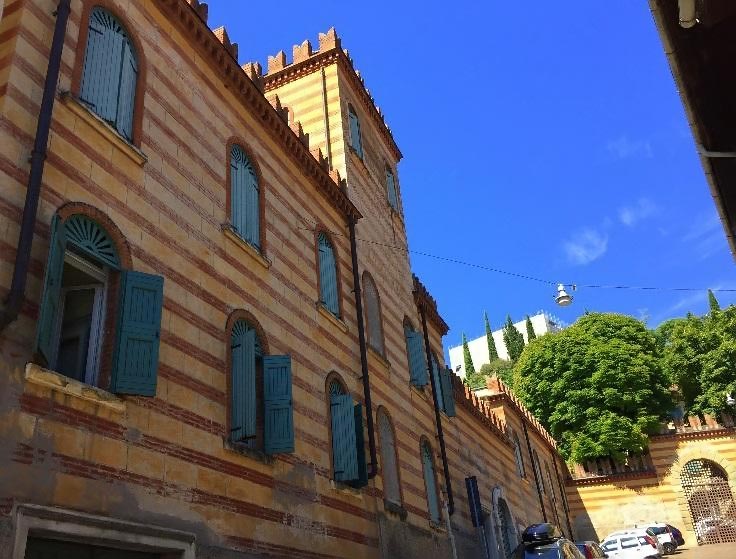 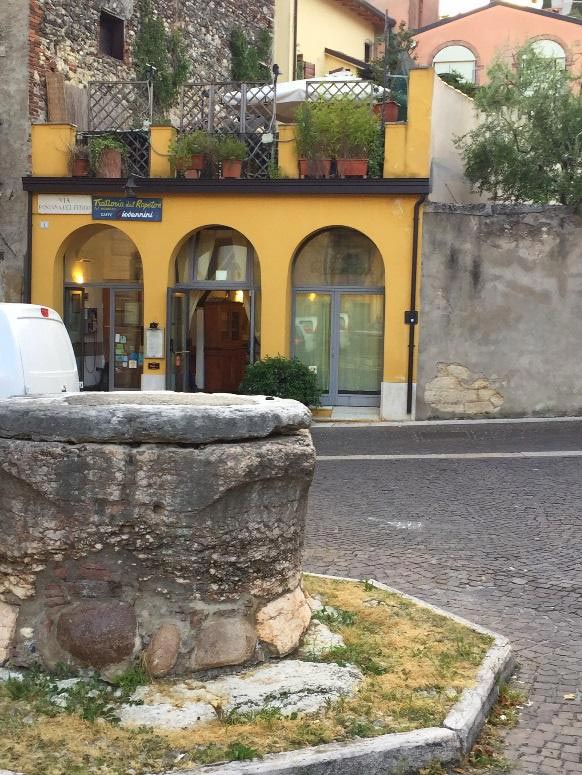 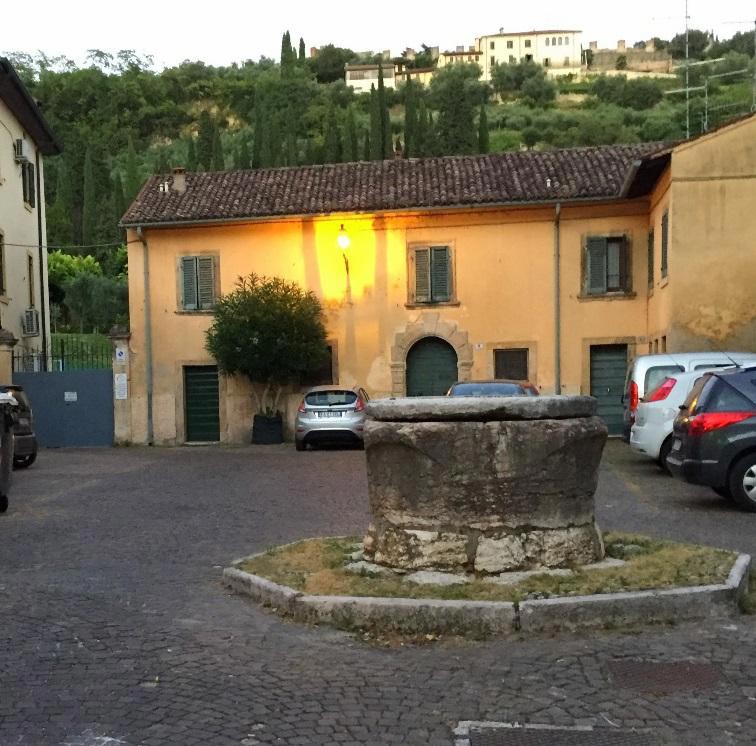 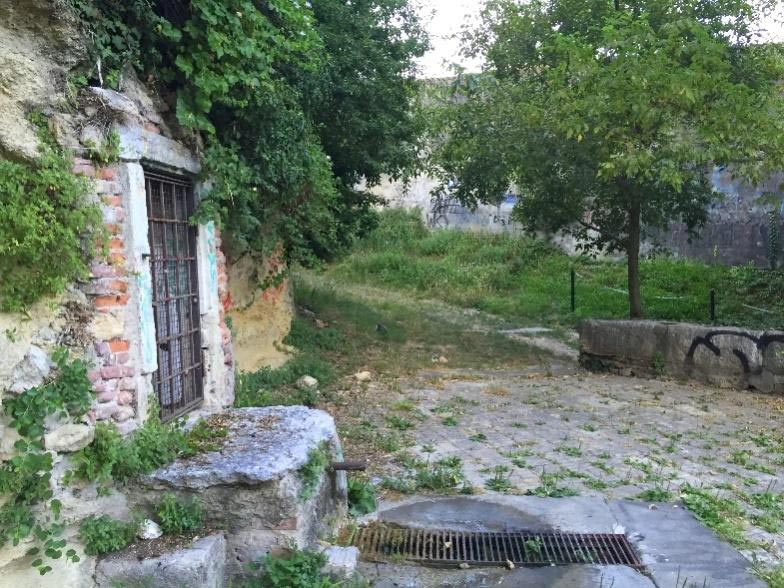 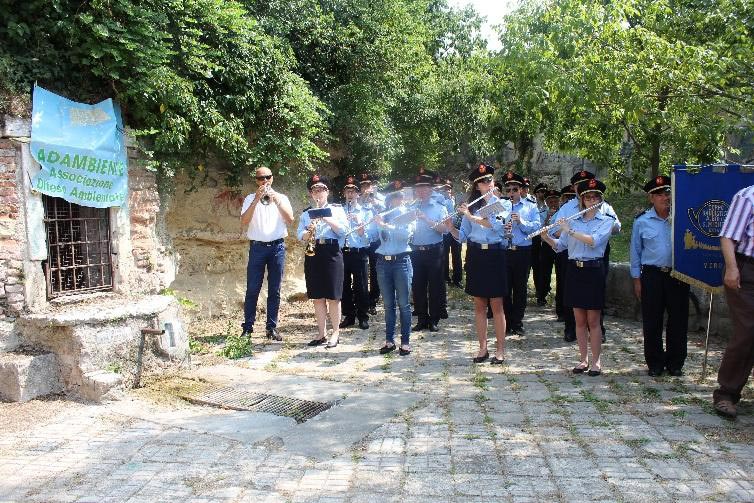 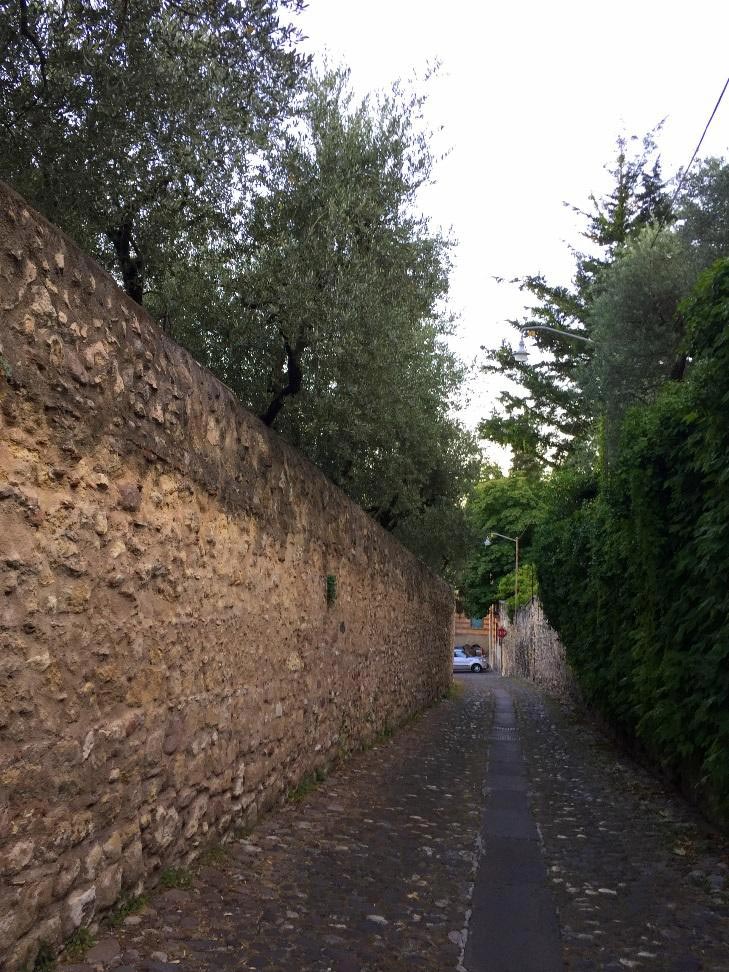 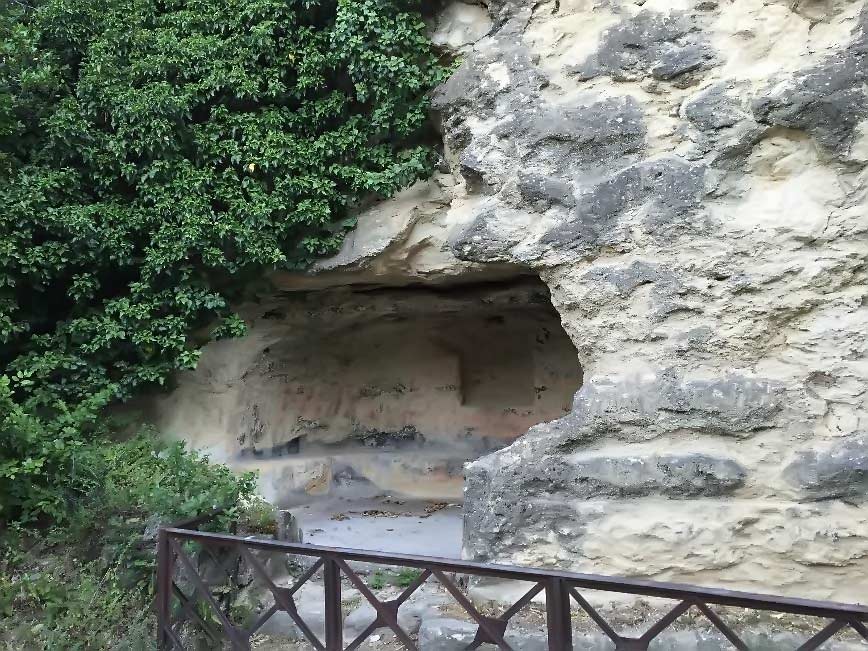 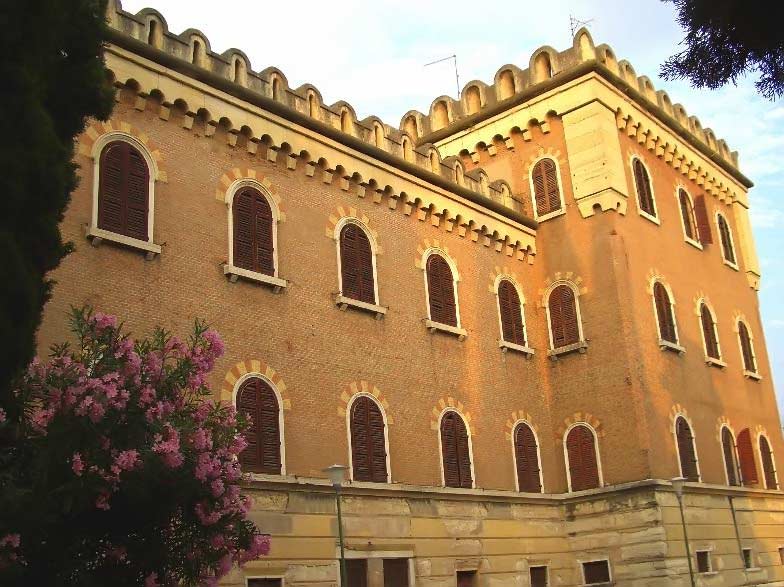 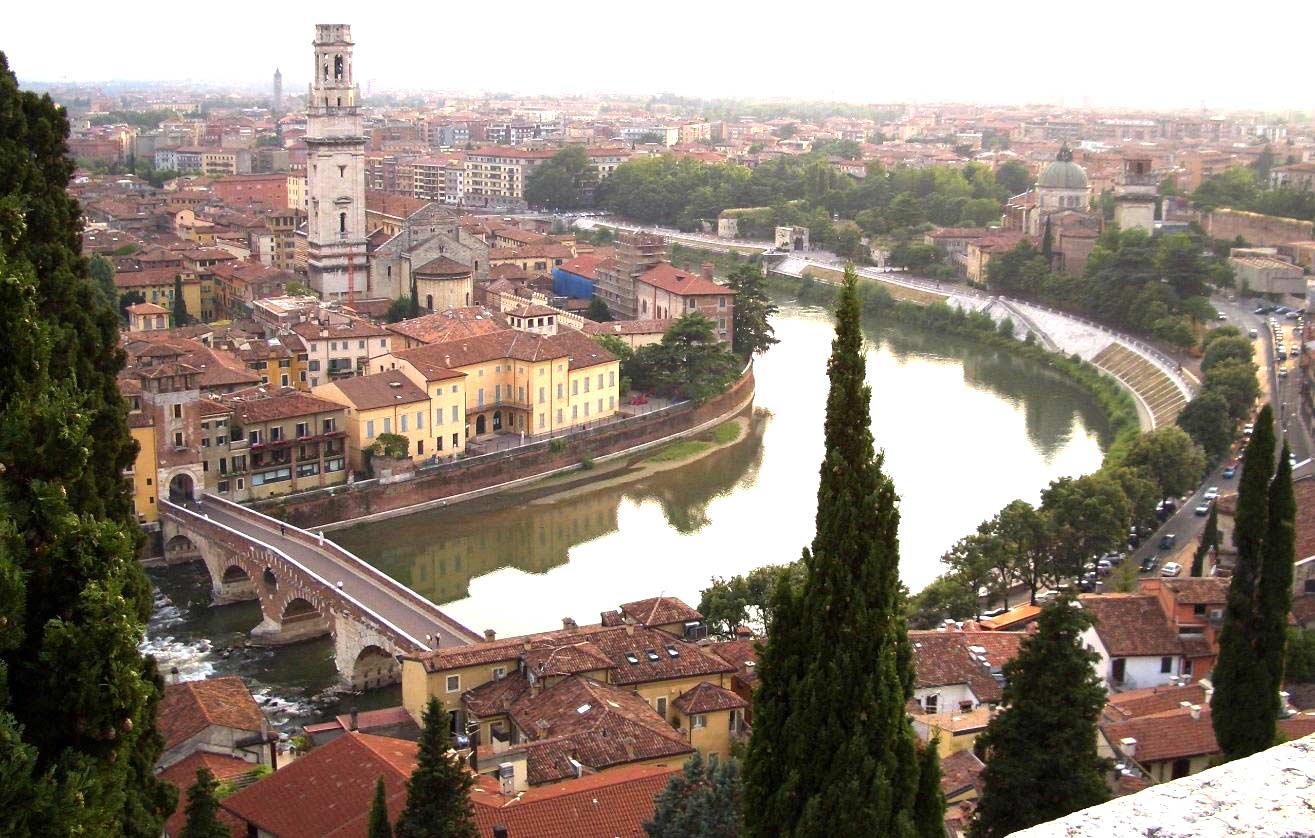 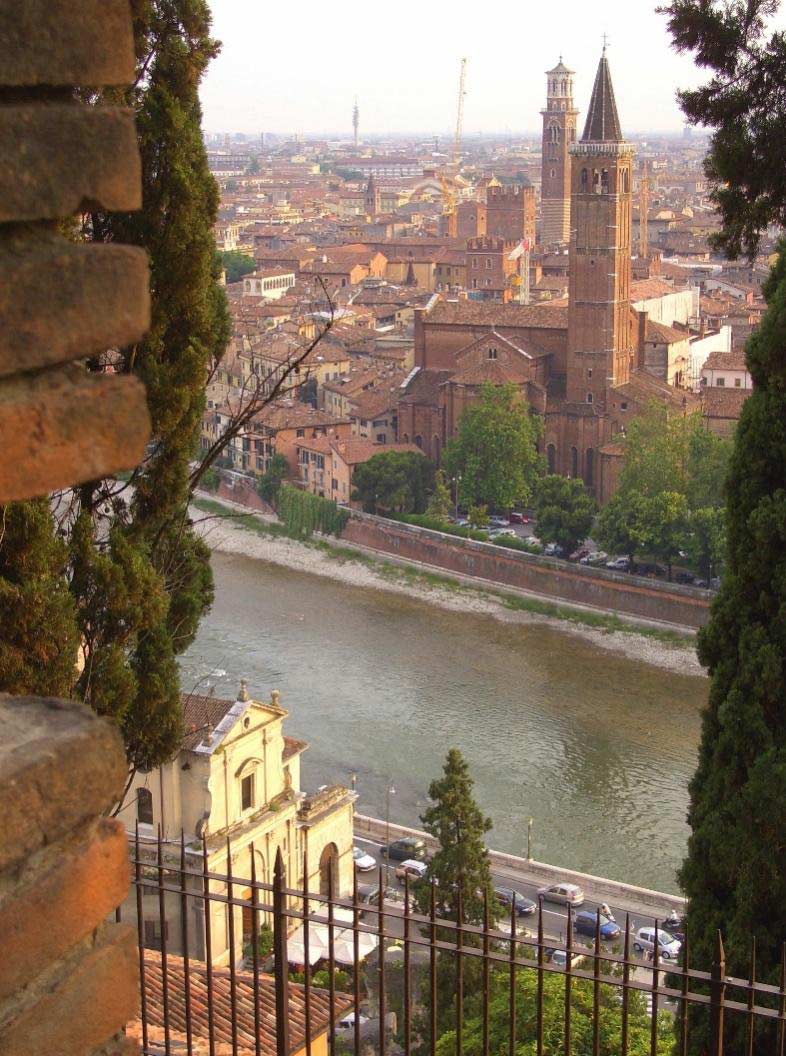 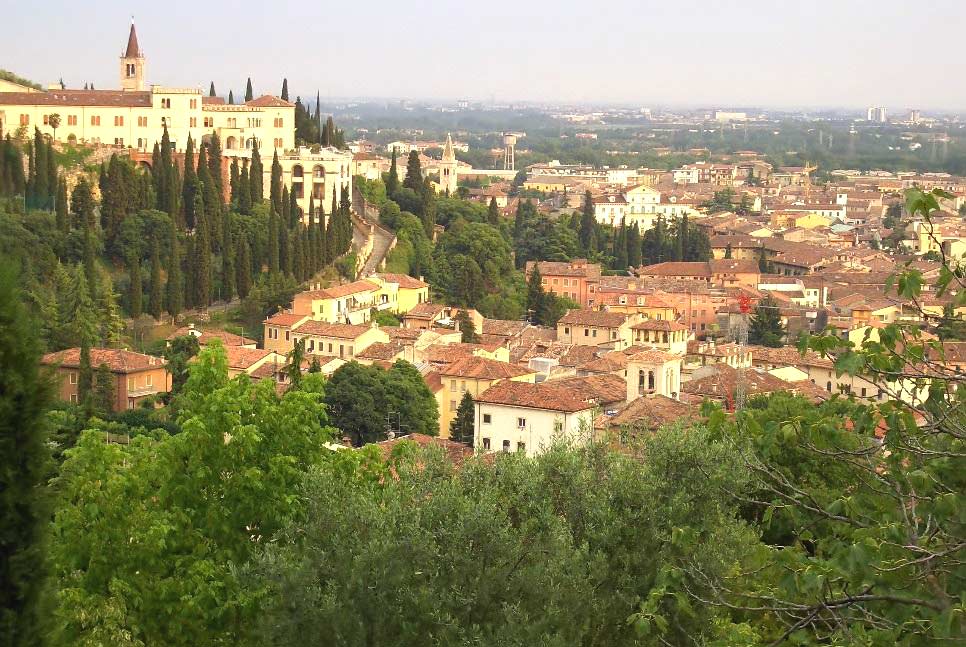 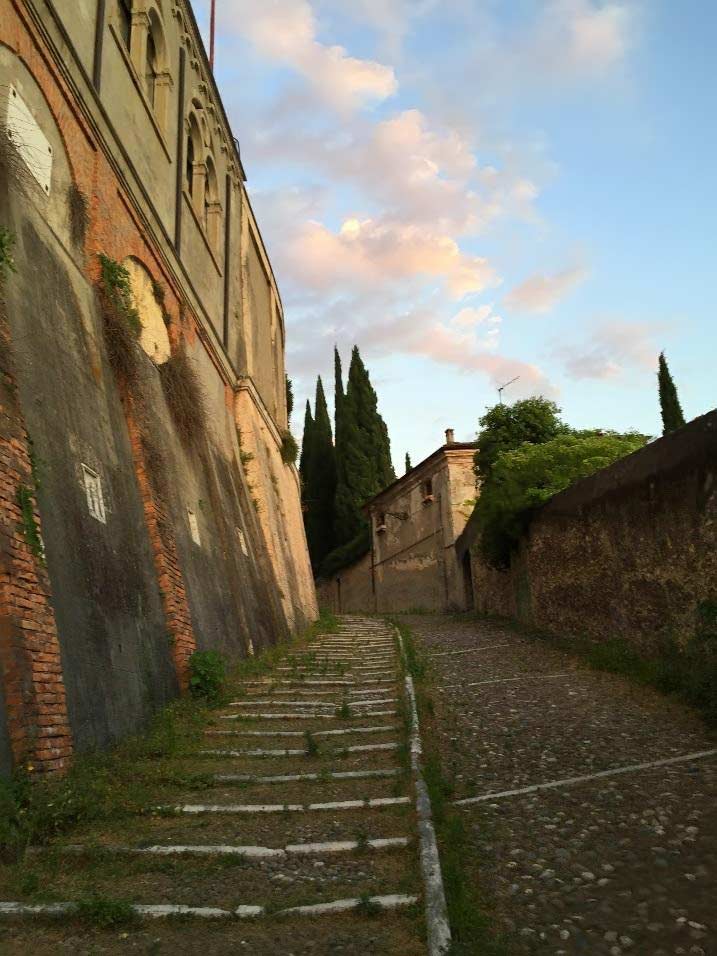 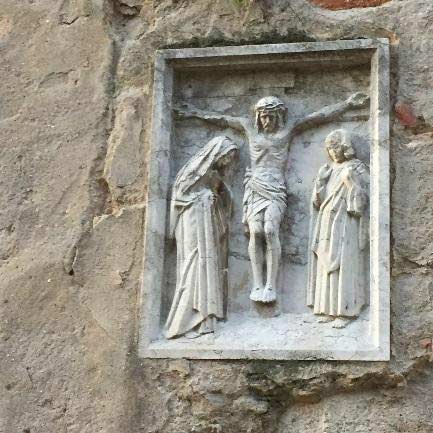 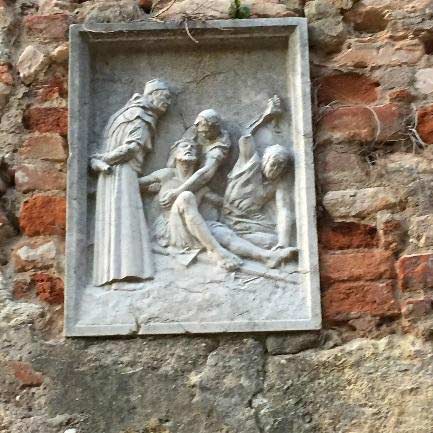 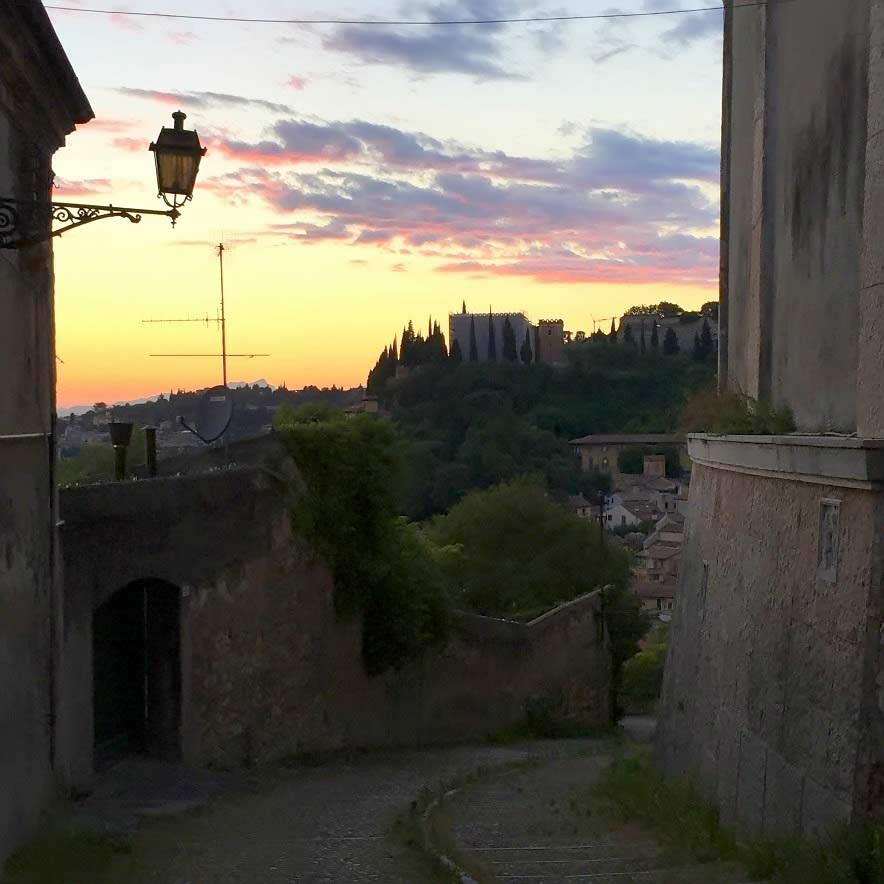 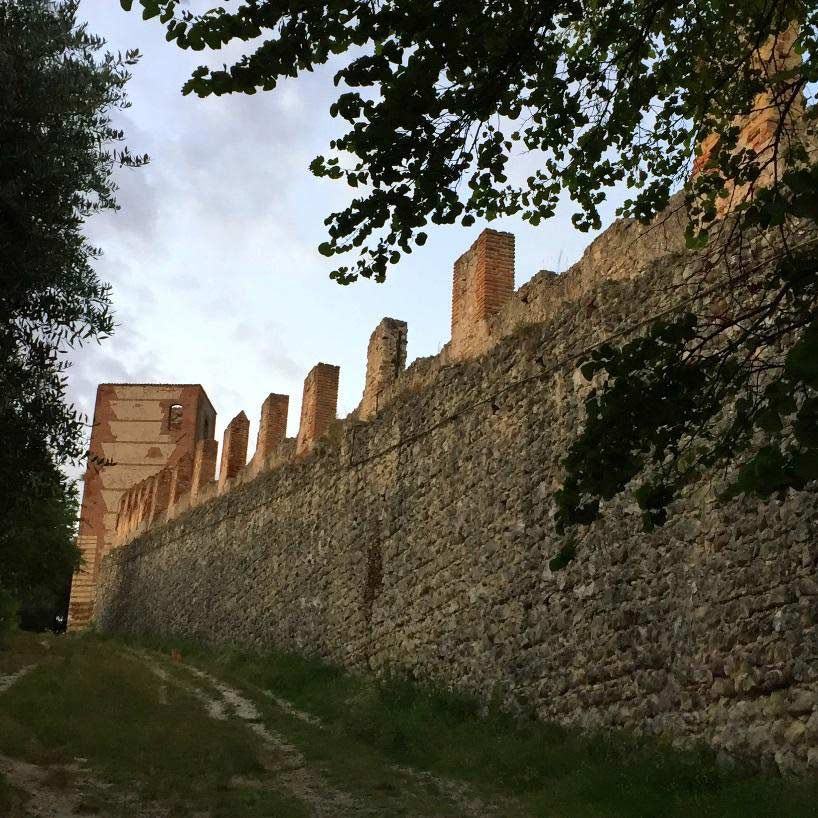 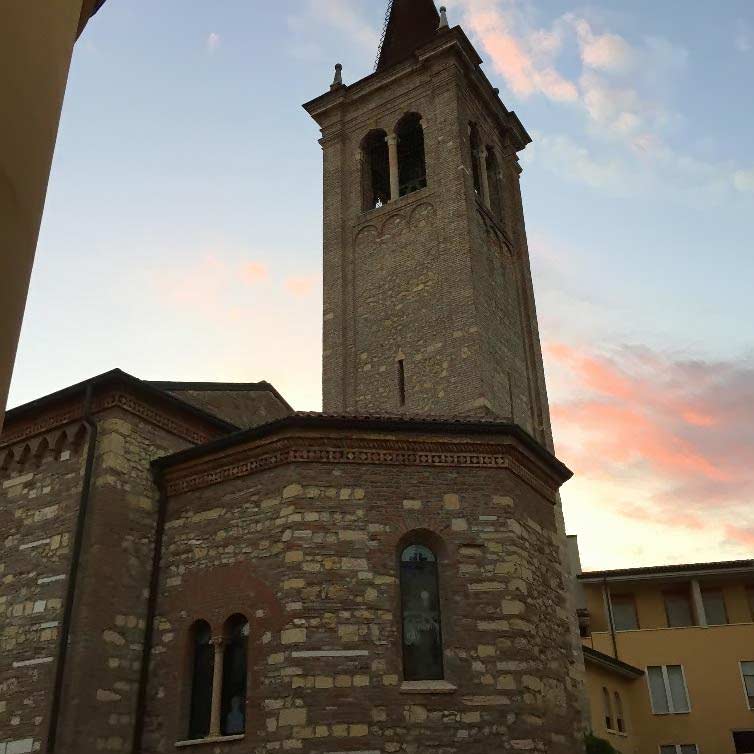 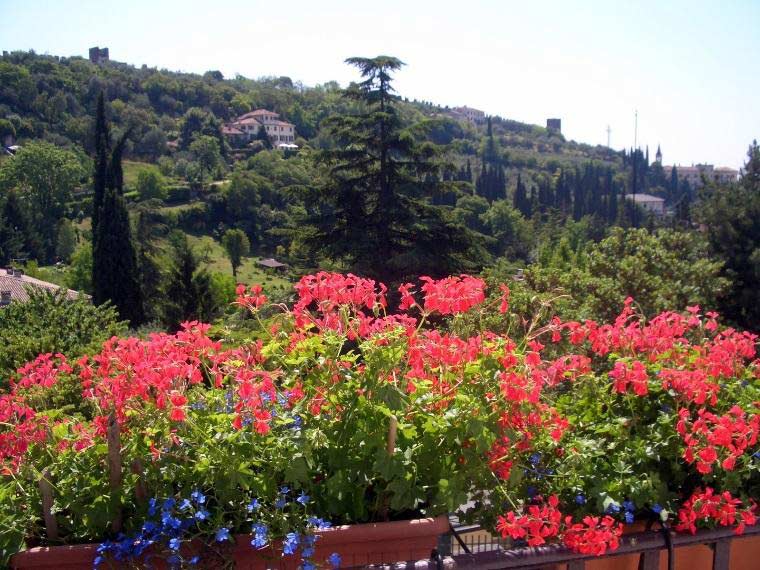 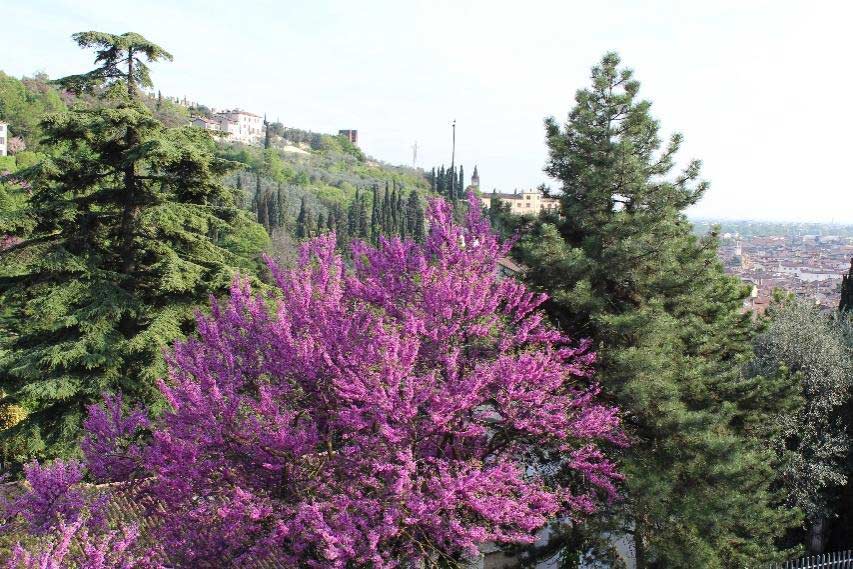